You've all heard the saying, 'You can't buy happiness, but you can buy a jar of Nutella, and that's almost the same thing'. Well, I take your Nutella jar and I raise you Nutella filled doughnuts. These babies are equal to, and possibly greater than happiness. Did I mention they can be whipped up in 20 minutes? 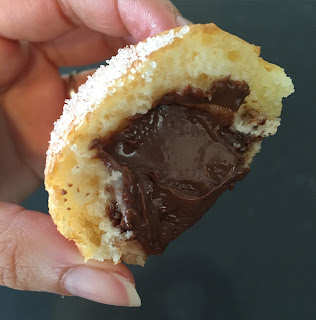 I love my Nutella like a fat kid loves... Nutella. In fact, I was that fat kid until I discovered some weights and the notion of moderation. I am so obsessed that I can tell you all about its creation, when International Nutella Day is, AND I can show you my collector glass jars from the 90's. Want to know more? Read the Two Ingredient Nutella Brownie blog :)

I've been playing with this particular recipe for about a month. Thanks to the all-knowing Food Technology teacher I work with, self raising flour made its appearance and is here to stay. You can use plain flour if you're after something a little more dense. 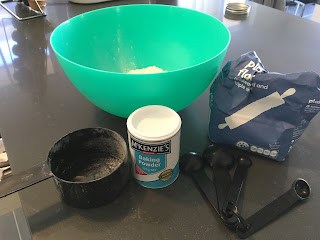 1) Spoon small globs of Nutella onto a plate lined with grease proof paper. The size is up to you, however I suggest starting small for your first attempt. Freeze for at least 15 minutes. Once frozen the globs are so user friendly. 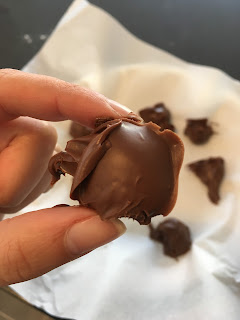 2) Beat the eggs and caster sugar until glossy. I use an electric beater for speed. Add your other ingredients, alternating between wet and dry. You want your batter to be soft enough to coat the frozen Nutella easily. Use your discretion when adding or reducing the amount of milk you wish to use. 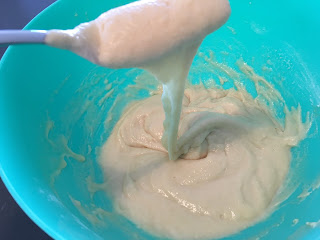 3) Heat the oil, on a medium/ hot setting. I prefer to shallow fry, for better control when turning the doughnuts over.

4) Use a dessert spoon to scoop up the batter. Place a Nutella glob in the middle and (very messily) draw some of the batter up and ever the Nutella. The runnier the batter, the easier this is to do. 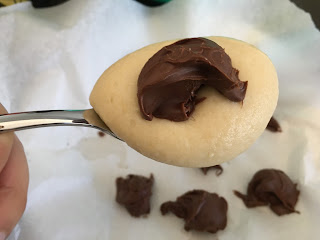 5) Using your finger, slide the doughnut off the spoon and into the oil. Fry until the bottom is golden brown, or until it's cooked. Turn the doughnut over and repeat. Use the usual toothpick test. If you poke the doughnut and the toothpick comes out clean, you're done. If not, give it a little longer. 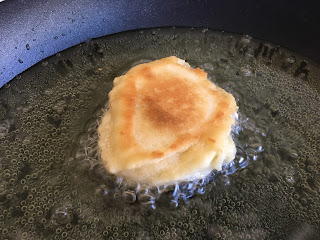 6) Cool and drain the doughnuts on grease proof paper. 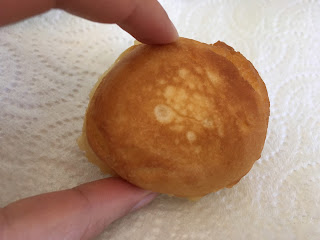 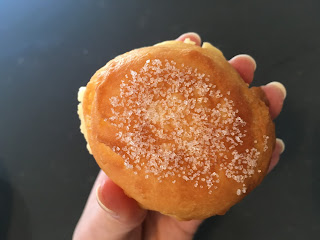 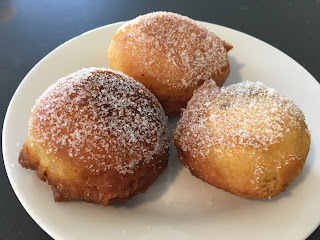 When you get the hang of this, you can increase the amount of Nutella that you put in each doughnut. You can also fry about 3 or 4 at the same time with relative ease. I have tried the same recipe with jam, and it is almost as delicious. Try your own and be sure to let me know what works. You can't be developing diabetes all on your own. 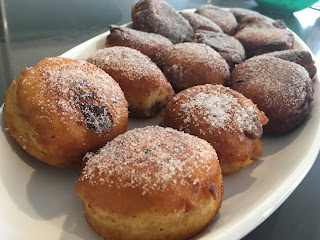 As for that leftover batter... 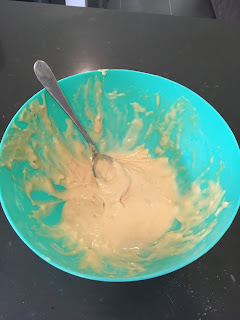 It's as simple as it sounds. Fill a mug with the batter, about a third of the way. I put a dollop of jam in the middle. Microwave for 90 seconds. 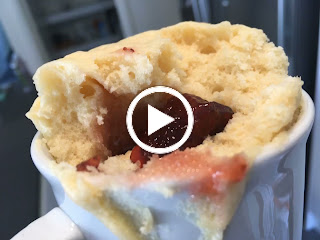 I appreciate you, inside and out.

That's all for now. May yours be as ducking delicious as mine.
Posted by Mary Jekki Acosta at 03:57 6 comments:

If you've been living under a rock (pool?) you may not have heard that Neil Perry's jewel in the crown, Rockpool Est. 1989 is closing its doors for good tonight.

Before you begin to fret, please be assured that the talented Mr Perry will not be leaving us without Rockpool Bar and Grill, Spice Temple or any of the other restaurants that are part of the Rockpool Group. In fact, Eleven Bridge, an a la carte reincarnation of Rockpool Est. 1989, opens on the 8th of August.

As a last hurrah, and as a belated engagement celebration, my better half and I opted for the degustation. That's right. Eight of the chef's signature dishes, delicately crafted to appeal to all senses. Here is how it went. 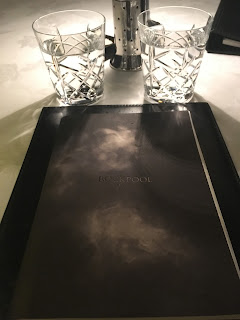 Within moments of being seated, we were greeted with freshly baked bread, smokey butter cream and  ricotta with pear. 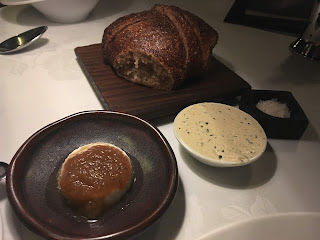 Course by course, every part of my palette was tickled.


Zesty and light. Even the olive oil was fruity and fresh.

My favourite savoury course of the night. Pure perfection. I'm praying that it's an option on the a la carte menu at Eleven Bridge.

Delicate and sweet, with a bit of crunch.

So tender I didn't have to chew. The thing is, I reaaaally wanted to.

Right after this course, the waiter asked "Would you like a break?"
I had to stop myself from saying, "Break? Please." I opted for a, "No thank you," and kept the goodies rolling.

The thinnest most crisp meringue-like case, filled with pandan custard that made me think of the smoothest brûlée I've ever eaten.  The decadence is perfectly offset by lime granita and an oddly delicious jasmine rice sorbet. I would've happily ended on this course (and eaten another six serves if given the option).

Don't judge. He joined me for a fancy pants degustation when all he really wanted was a snack pack.

Oh my... Every taste bud was turned on by this beauty. Jaffa's richer and much sexier older sibling. I will never know how that toffee shard was crafted, or how it remained crisp and in tact even after five minutes or so.
Wow. Just wow. 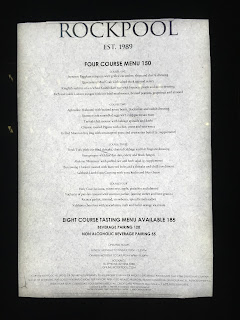 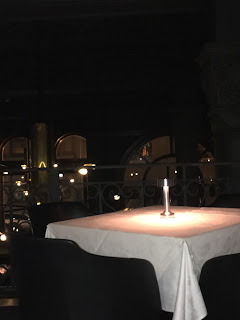 Goodnight Rockpool Est. 1989. I thank you for our memorable engagement dinner and cannot wait to see what will become of you.

Posted by Mary Jekki Acosta at 06:28 No comments:

Let's face it. I don't care how soft serve was discovered. I'm just glad that it was.

You can believe that soft serve was brought into the world because of a serendipitous breakdown of an ice cream truck in 1934, or you can believe that a pre-political Margaret Thatcher worked as part of the team who created it. (Seriously, look up the origins. Both theories truly exist! I personally prefer the unicorn theory ) Either way, it's here, and it makes me oh so happy.

If you're anything like me, you probably have a lot of questions about this magical stuff.
What is it about soft serve? Why can I eat it even after I've claimed that I'm full to the brim? Why does it seem like a great idea even on the coldest day of Winter? Why can't I get ANY MacDonald's to serve me one at 2am (when I need it most)?

A lot of it comes down to je ne sais qoui, but some of it can be explained. Soft serve has lower milk fat content than regular ice cream. It's served at a higher temperature. During the freezing process, soft serve mix is aerated. All of which create the comforting, light dessert, which we manage to squish in after our jeans get too tight.

I had a scratch that needed itching. I went to Regent Place, the foodie precinct tucked behind Town Hall Station (Sydney). It's Soft Serve Heaven, where ice cream is actually served on white fluffy clouds. A place where no filters are needed for your food pictures. Add a cherub playing a harp and you really won't know where you are.

Below are my findings (in order of eating).

Soft Serve Flavour: Sea salt is a staple, and can never go wrong. The coconut with sea salt, pure perfection.
Soft Serve Texture: Light and fluffy, but somehow still decadent enough
Bells and Whistles: The cone (that you can't exactly see) is crisp, but could do with a bit of waffle-like buttery-ness. Maybe the marshmallow and fairy floss are a liiiitttle bit of overkill, but they are too fun to miss out on!


Soft Serve Flavour: The blueberry flavour was slightly too artificial for my liking, but the sea salt held its own.
Soft Serve Texture: As above.
Bells and Whistles: As above, although the crunch of the popcorn is a nice touch.

Soft Serve Flavour: Both the taro and tiramisu tasted a little too artificial. There was a definite lack of richness.
Soft Serve Texture: It seemed as though the soft serve wasn't quite aerated. I could feel graininess and density.
Bells and Whistles: The puffer fish was a bit of fun, but tasted and felt a bit like toast.

I'm sure it would be to the liking of others, but I can't say it was for me, particularly after Aqua S.

Soft Serve Flavour: Matcha (green tea) and azuki (red bean) actually match-a (hahaha). I love matcha, so a bit of earthiness never scares me off. Azuki was a little overpowered, but helped to cut through the intensity of the matcha,
Soft Serve Texture: Silky smooth, but not quite Aqua S smooth.
Bells and Whistles: The better cone of the lot, but I still would like that buttery waffle taste.


Now I confess that I did not try the following on the same day, but I feel the need to show you my all time favourite soft serve. You're welcome.


No words... Just wait for it to come back. It might be a while considering Aqua S' fortnightly rotation of flavours, but I promise you, it'll be worth it.

Until next time duckers ;)
Posted by Mary Jekki Acosta at 23:21 No comments:

The Search for Sydney's Best Curry

Winter is upon us...
There's one surefire way to beat the cold. Eat the heat! I'm talking warm, hearty curry, with generous amounts of slow cooked beef, lamb or chicken, served with fragrant rice.

When I was told that I'd find the best ever beef curry in a Malaysian restaurant, I was cynical. With all of the rich Indian, Thai and Chinese curries that I'd tried, I simply could not comprehend anything better. Since I never say no to new food (and I never say no to my future-in laws hehe), I ended up at The Malaya.

Before tasting a thing, I was impressed by the perfect view and the immaculately kept kitchen. Maybe it's the OCD surfacing, maybe it's the controlling school teacher within, that can't even be switched off during holidays. Whatever it is, I love to see the inner workings of kitchens. 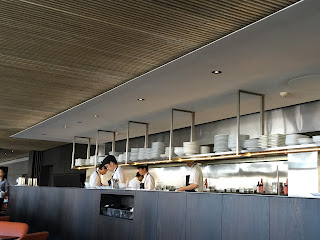 Let's not get too hasty and jump straight into the fire, I mean, curry. Entrees at the Malaya are definitely worth a mention. This spanner crab sang choy bow was perfectly balanced. The sweetness and natural flavour of the crab was complimented with subtle flavours, the crunch of water chestnut and the crisp lettuce leaf.

At this point, I had decided that it couldn't get any better. I hate being wrong, but this time, I was soooo glad that I was. Four serves, absolutely demolished by our party of four. I'm talking ever drop of sauce, and even the coriander garnish.

So, what's so amazing about this curry? It's truly unique. Hints of creaminess, without being overpoweringly rich. Viscous enough to eat with the spoon, but no graininess. A range of spices that are so intricately mixed that you can't quite put your finger on how it's been put together.

The bottom line. This curry is a must try.

When I got home, I furiously researched this sorcery. I mean, how could anything compare to a Thai Red Duck Curry or an Indian Beef Rendang? The answer: Malaysia is a melting pot of culinary culture. Chinese, British and surprise, surprise Indian and Thai (just to name a few). Working with the best bits. Genius. It's no wonder The Malaya have not amended that recipe of theirs for over 50 years.

Oh, and you know how I'm all about that base, 'bout that base? In my travels a found that The Malaya sells their most popular bases:
http://www.themalaya.com.au/shop/item/curry-base

Watch this space for the upcoming (almost) DIY attempt.